Mrs. Sarah Strong McConihe Information on this page is from History of Rensselaer Co., New York by Nathaniel Bartlett Sylvester, published in 1880. It was typed and submitted by Bob McConihe. 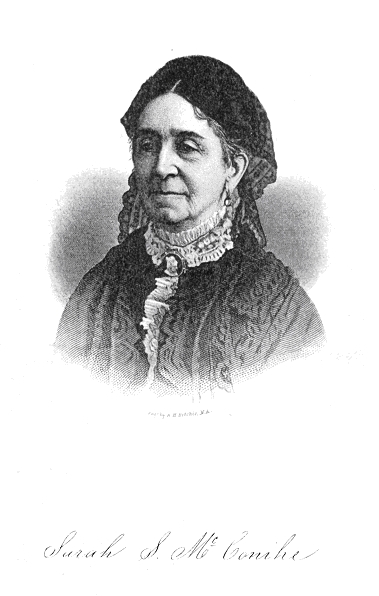 MRS. SARAH STRONG MCCONIHE was born in Deerfield, Mass., Feb. 15, 1805, and was five years of age when her father, Hezekiah W. Strong, removed from Deerfield and settled at Amherst, his native place, where the old family mansion still remains in perfect preservation, the most attractive place in the beautiful town of Amherst. Her father was the son of Simeon Strong, Judge of the Supreme Court of the Commonwealth of Massachusetts and Maine, and an intimate friend and own cousin of Governor Caleb Strong, of Massachusetts. Her mother's name was Dwight, and the Strongs and the Dwights are to be found among the oldest, most honored and most talented families of the New England States.

She received her primary education in the academy at Amherst, which was founded by her father, and was the germ of Amherst College. When she was thirteen years of age she wrote declamations for her brother, Henry W. Strong, at that time nine years of age, to speak upon the stage at the Academy, and often took him to a grove near her father's residence to practice him in gesture and oratory, - possibly the foundation of his future eloquence. At the age of fourteen she passed so brilliant an examination, and in such advanced studies, that a gentleman who was present invited her, the following spring (she then being fifteen years of age), to take charge of a school for young ladies in New Braintree, where he resided. At the age of sixteen, through the urgent solicitations of Noah Webster, at that time President of the Board of Trustees, she was induced to take charge of the Ladies Department of Amherst Academy, the most celebrated school for ladies in New England, and quite in advance of the times, the higher branches, such as Euclid, Stewart's Philosophy, Hershel's Astronomy, with the calculation and projection of eclipses, etc., etc., being taught. The school numbered ninety-two ladies, from every State in the East, many who were teachers further qualifying themselves, and very many who were her seniors by many years, one of them, Mary Lyon, the founder of Mount Holyoke Seminary, then twenty-three years of age, taking the rudimentary branches, received her first inspiration for education. She conducted the school with marked ability and success.

She further prosecuted her studies at Rev. Joseph Emerson's seminary, at Saugus, near Boston, and at Mrs. Emma Willard's seminary, in Troy, having come to the latter place with a letter of introduction to Prof. Eaton, founder of the Polytechnic Institute, who remained an intimate friend of hers during his life. Mrs. Emma Willard was also one of her most constant and attached friends.

She was married, April 10, 1826, to Isaac McConihe, of Troy. Since she became a permanent resident of Troy her life has been one of constant care and activity. Seeming to inherit the spirit of charity, and a general interest for those around her, she has been closely identified with enterprises fraught with obstacles and discouragements in the beginning, which, by her far-sightedness and indomitable perseverance, have resulted in good to humanity and much credit to herself.

Although burdened with the cares of a large family, she ever found time to do something for every good work that duty pointed out and required, and her executive ability and resolution to carry forward to a successful completion whatever she attempted, have, in many instances, received public recognition. Upon the founding of the Orphan Asylum of Troy, she was a member of the first board of managers, which position she afterwards resigned on account of family cares. She was one of the founders of the Day Home of Troy, organized in 1853, - an institution very dear to her and one to which she has devoted much time and made liberal contributions. Mrs. McConihe has been a member of the committee of management from its earliest history, and has been president of the institution for many years. This home for the education and training of the children of impoverished parents was at first carried on in a rented building, and it becoming necessary, in 1861, to make a change, Mrs. McConihe was one of the committee of three to purchase a place for the better accommodations of this charity. Although insurmountable obstacles seemed at hand, she took upon herself the responsibility of raising the necessary amount to purchase and repair the present Day Home, costing some seven thousand dollars. Notwithstanding that the war of the Rebellion had just broken out, and the 2nd Regiment was being raised, she succeeded in obtaining the requisite sum in the short time of five weeks, and one thousand dollars for repairs after the purchase-money was secured. This may be noted as being the first institution in the United States solely under the management of women receiving a charted from a Legislature.

Once established, its support and continuance must be secured. Mrs. McConihe was equal to the emergency. She appeared personally on several occasions, with others whom she moved to accompany her, before the committee of ways and means of the Legislature, and obtained at different times sums aggregating twelve thousand dollars, and most of the remainder of the funds have been obtained in answer to her personal solicitations of individuals for bequests.

Mrs. McConihe's untiring industry, judicious management, and perseverance in the establishment and advancement of the Day Home, will be recognized by future generations, and remain as one of the monuments of her moral worth and Christian excellence. She became a member of the Episcopal Church the same year of her marriage, and has remained constant in that connection, and a supporter of church and educational interests.

During the Rebellion she cheerfully gave three of her sons to the defense of her country. Intensely patriotic, she believed that the Rebellion could never be crushed until the slaves were emancipated. She was active in societies and fairs gotten up for the relief of soldiers, and was in Washington, attending a wounded son, when she had the happiness of hearing read, before Congress, Lincoln's celebrated "Emancipation Proclamation."

On the occasion of the "Semi-centennial Anniversary of Amherst College," in 1871, she was the only lady officially invited to be present, and the only lady mentioned during the exercises.

The same year, in company with Prof, Burgess and wife, and Prof. Root, of Amherst College, she visited Europe, and traveled through most of the countries on that continent, and for two years became a close student of science, literature, and art. The occupation of her time during these two years may be better expressed by a quotation from the writings of J.W. Burgess, Esq., Professor of Public Law and Political Science in Columbia College Law School, and who accompanied her in her travels:

"I saw her, at an age when the faculties of most men and women rebel against any new thing, take up the study of a most difficult language and make herself familiar with its forms both in reading and conversation. I have seen her, at an age when most men and women have need to take extraordinary periods of daily rest, and are compelled to rely upon the aids of physical weakness, rise at four and five o'clock in the morning, and travel until eight o'clock in the evening, visiting, with untiring enthusiasm, galleries of art, museums of science, ascending towers and mountains, even crossing the dangerous glacier-passes of the high Alps. I have seen her time and again in her own parlor-study in Berlin, Germany, entering with the greatest spirit and attention into the discussion of the problems of German philosophy and science, and European history and politics, - themes for which too many of her sex have, alas! too little appreciation and understanding. In all that I saw of Mrs. McConihe during those two years of intimate acquaintance she was ever the same bright, cheerful, sympathizing, energetic, independent, and capable woman."